FEDERAL CERTIFIED HEARING CENTER Inc.  is a family owned business committed to providing you with excellent care and custom solutions to fit your hearing needs.

To find out how we hear - lets study the human ear diagram.

First the sound waves travel into the ear canal, they vibrate the tympanic membrane, commonly called the eardrum. The eardrum is a thin, cone-shaped piece of skin. It is positioned between the ear canal and the middle ear.

Before the sound passes on to the inner ear, the total pressure must be amplified.

This is the job of the ossicles, a group of tiny bones in the middle ear. The ossicles are actually the smallest bones in your body. 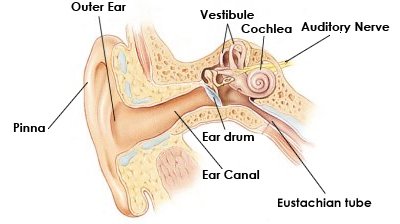 Next the cochlea in the inner ear conducts sound through a fluid, instead of through air.

The cochlea is by far the most complex part of the ear. Its job is to take the physical vibrations caused by the sound wave and translate them into electrical information the brain can recognize as distinct sound.

The organ of corti is a structure containing thousands of tiny hair cells. It lies on the surface of the basilar membrane and extends across the length of the cochlea.

When these hair cells are moved, they send an electrical impulse through the cochlear nerve. The cochlear nerve sends these impulses on to the cerebral cortex, where the brain interprets them.

We are a family owned business committed to merging traditional values with today’s technology.  Our team will assist in finding a custom hearing solution that looks, feels, and sounds good to help you live a better and healthier life.

We are dedicated to helping every individual get back that special gift of hearing by providing the best hearing care in our community.